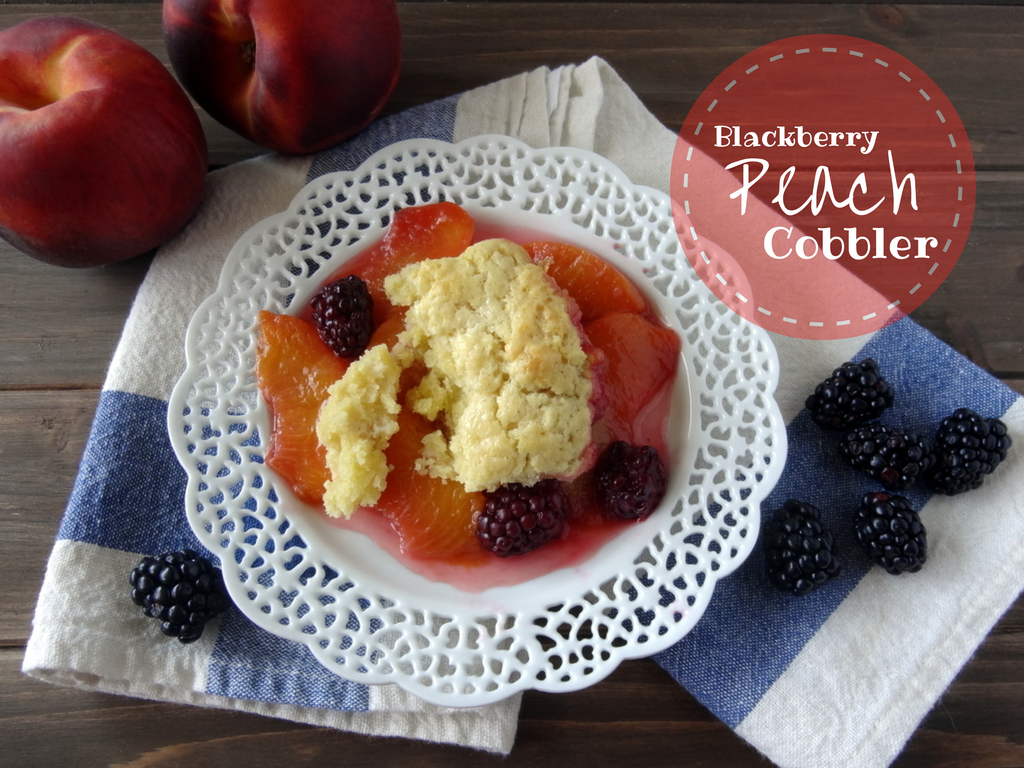 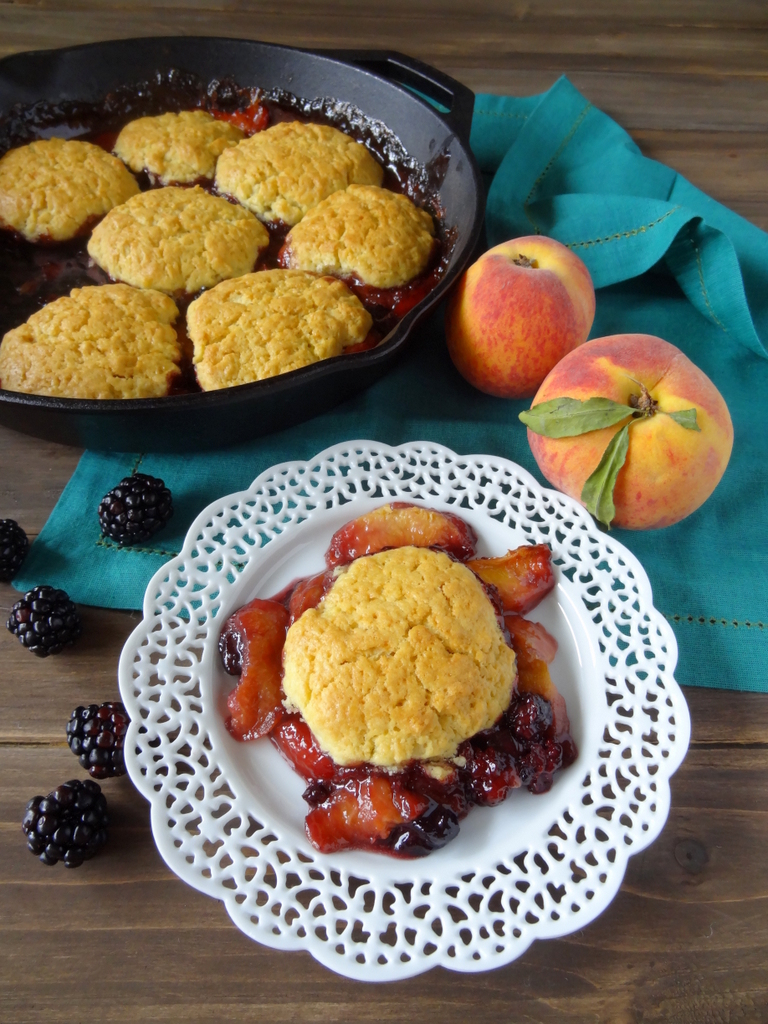 Is there any scent more heavenly than that of a bag of fresh peaches? Well, I suppose that depends what you’re in the mood for, but wow…the peaches I bought for this cobbler barely made it into the cobbler – they smelled so amazing that I nearly gobbled all of them up by themselves! 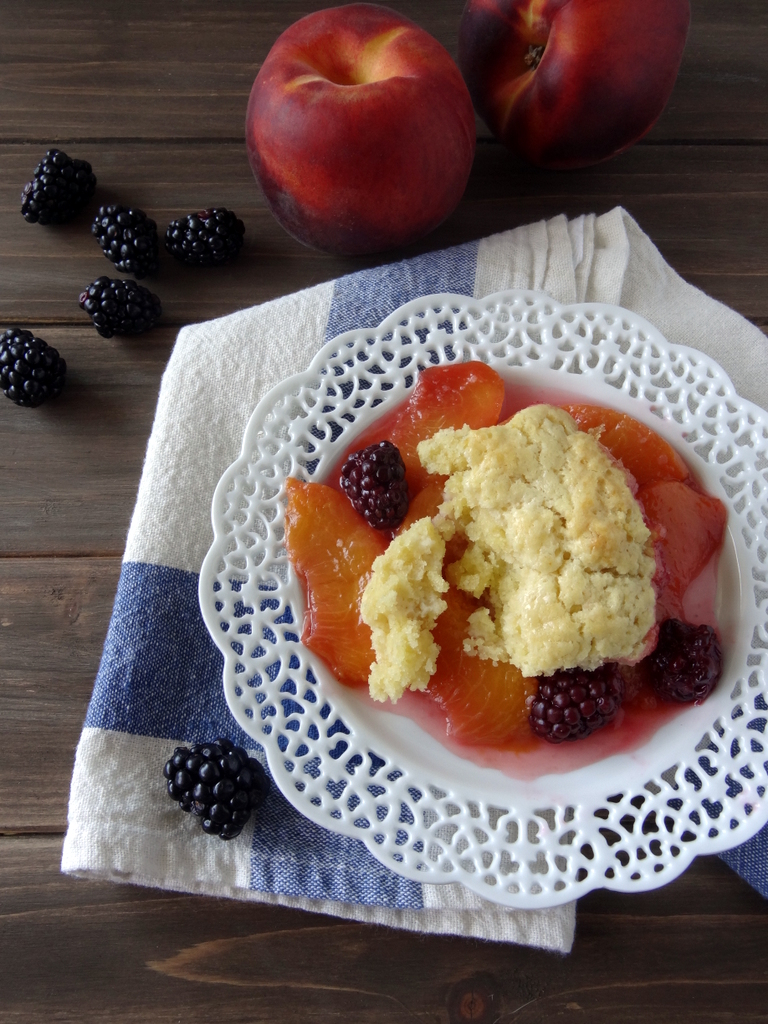 This cobbler was a bit of an experiment. You’ll notice from the pictures that there were two separate cobblers (check the linens to differentiate) – both were blackberry peach (although I used two different varieties of peach according to what the store had on sale each week), but the baking methods varied slightly.

Warning: this is about to get a bit nerdy, so feel free to skip to the bottom for my concluding notes (or directly to the recipe).

Thanks to America’s Test Kitchen, I learned a year or two ago that in order for the biscuits to cook equally on top and bottom, you need to bake the fruit by itself before adding the biscuit dough; otherwise, you’ll end up with biscuits that are underbaked and goopy on the underside – not the end of the world, but not ideal either. 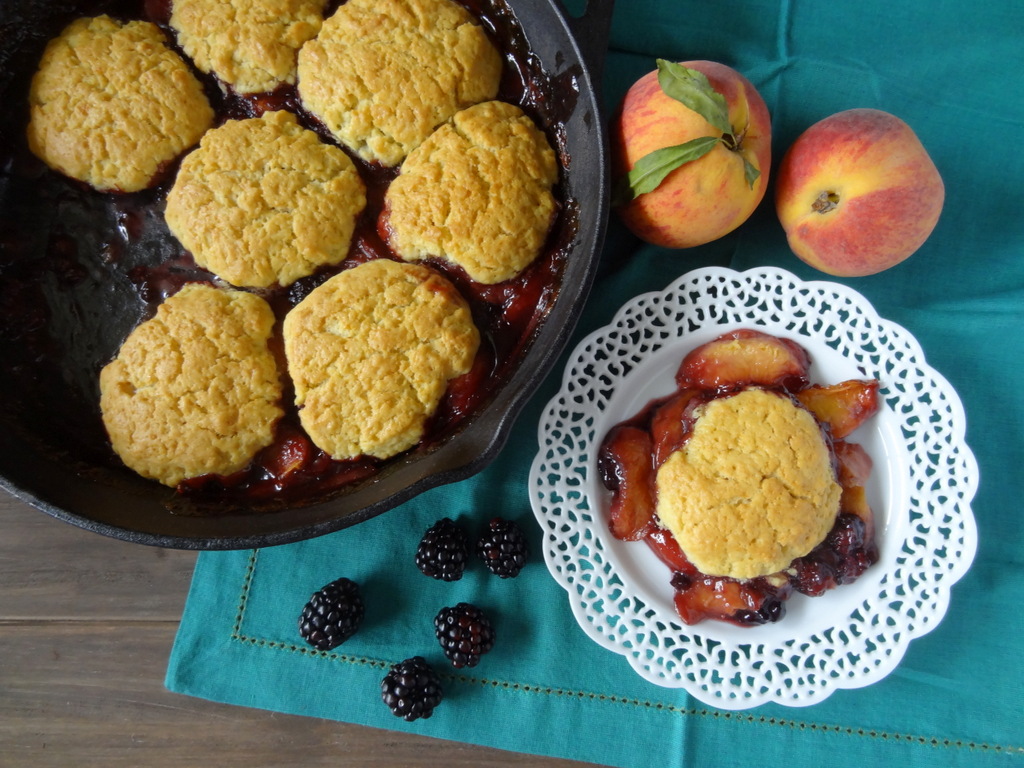 With this knowledge under my belt, I next wanted to figure out how to reduce the soupiness of the fruit mixture. Now I know that a good scientific comparison experiment should only have one variable from one rendition to the next, but I didn’t have the time, money, or calorie budget to make a dozen different cobblers. So here’s what I tried:

Version A (white and navy linens)

The results? It’s like Goldilocks (Peachilocks?): version A had a fair amount of soupiness, while version B had virtually no liquid, just a fruit mixture with a thick jam-like consistency. I personally would have preferred somewhere in between. The other differences: 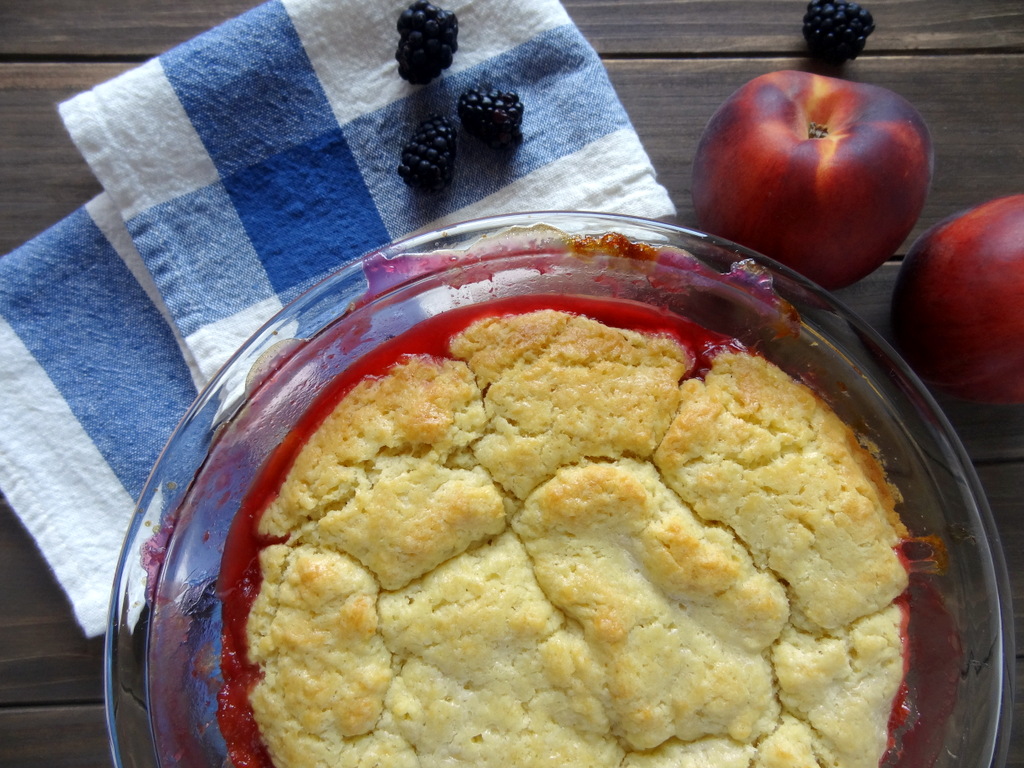 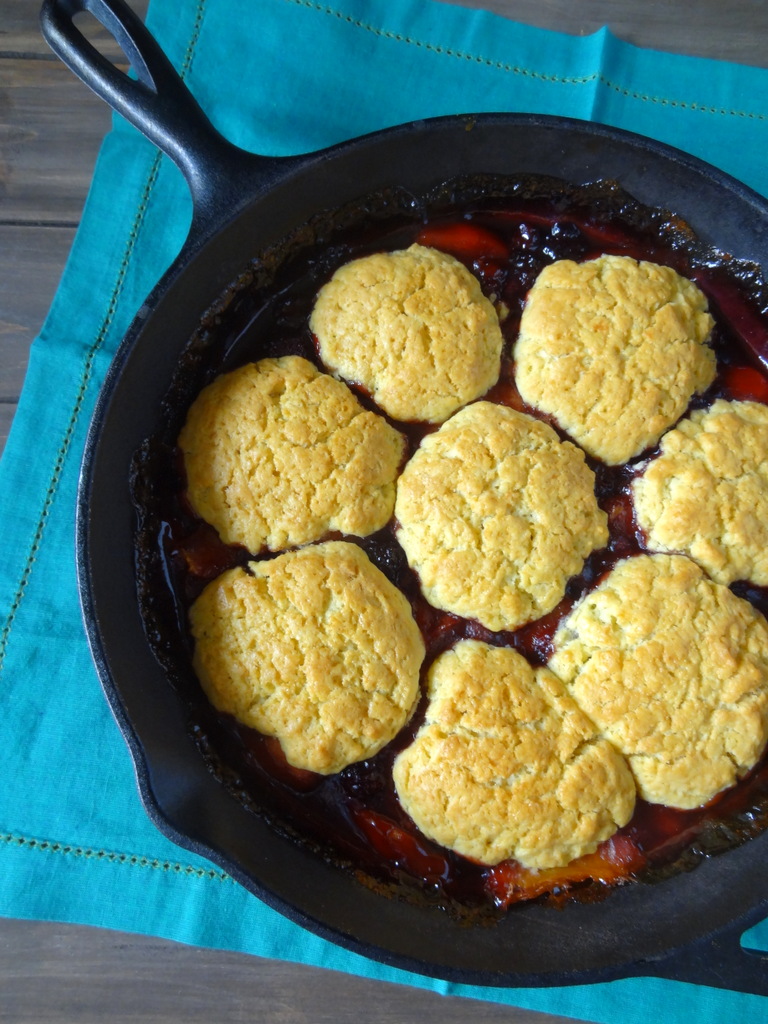 I’ve concluded that cooking the fruit (along with its juices) for a few minutes before baking really does make a difference – I’ve read that the cornstarch needs to boil to be fully activated, and while I previously thought that this would happen in the oven anyway, it certainly appears more effective to cook the fruit briefly first. I don’t think that the additional half tablespoon of cornstarch did much (in comparison to what cooking the fruit did), so I’ve omitted it from the recipe. This experiment also made me realize that while the fruit juices that pool at the bottom of the cobbler don’t make for the most attractive presentation, I much prefer the taste of a slightly messier-looking cobbler with some residual liquid to a prettier but stickier cobbler.

SO, in summary: it all comes down to what you prefer, both taste-wise and visually. As for me? My next cobbler will be baked in a casserole dish, with the fruit (juice included) cooked a bit before going into the oven. 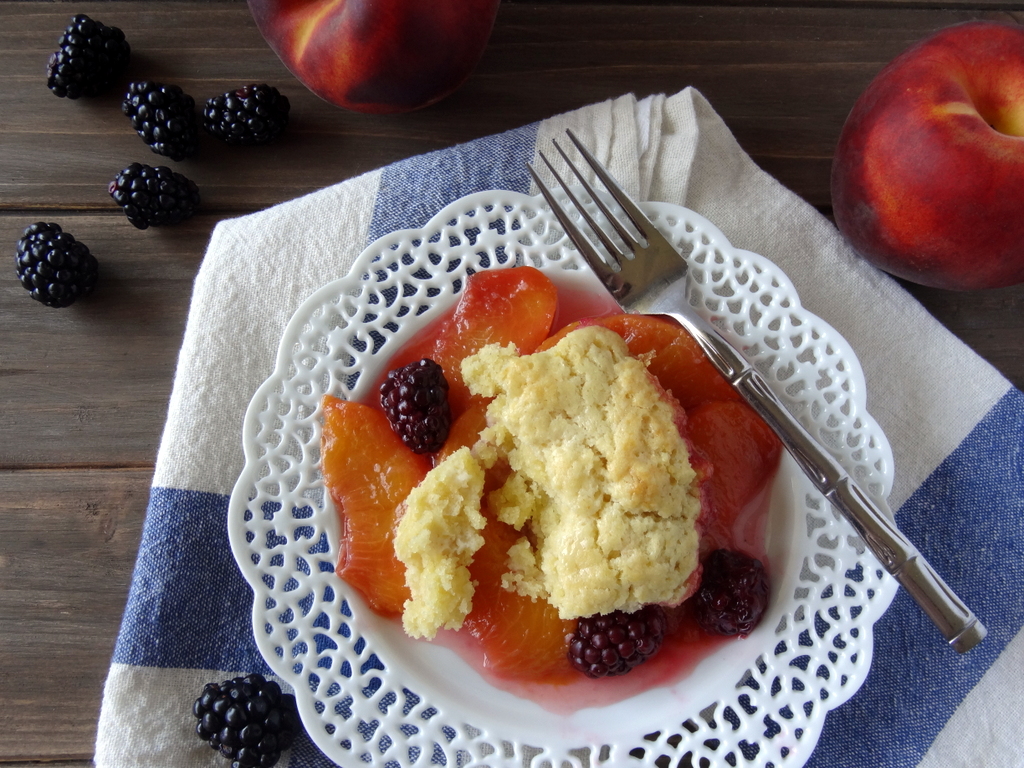 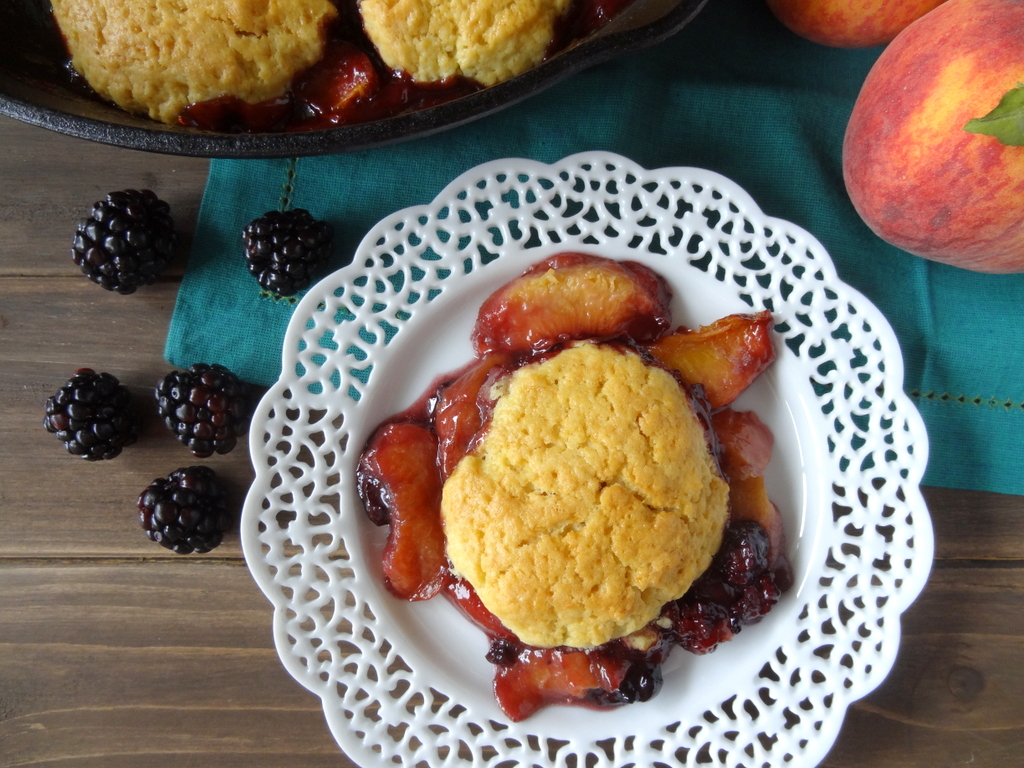